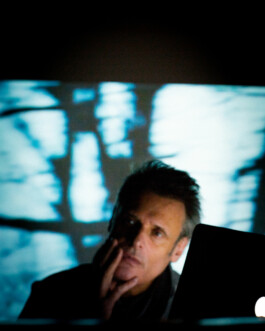 Charles de Meaux is a visual artist and film director. Born in Istanbul in 1967, he lives and works in Paris.

A multifaceted artist, Charles de Meaux questioned early on the rapport between artist and medium, choosing to consider it redundant. He was one of the first to work on the space between cinema and contemporary art. His works include visual installations, feature films, as much as sound sculptures or video installations.

Charles de Meaux explores the relevance of art in the world, addressing the question of otherness, and the representation of nature and landscapes. Much of his work touches on the meaning of landscape in the contemporary world, and how we inhabit and live Earth.

With a strong desire to take art out of the protective space of museums or movie theaters, Charles de Meaux’ work is very present in the public space. As such, one of his latest creations, Bestiaire, is a digital work visible only from metro trains, in the tunnel between two stations in the city of Rennes, in Brittany, France.

In 1997 Charles de Meaux created Anna Sanders Films, his own production company, with Pierre Huyghe, Philippe Parenno and Dominique Gonzalez‑Foerster. Charles de Meaux has directed several feature‑length fiction films “rooted in the folds of history and landscape”Le Monde 20.02.2014 (as portrayed in The Lady in the Portrait, 2017). His moving image work is divided between films for cinema and works created for museums as well as public and private institutions.

Charles de Meaux’ artistic propositions are naturally inscribed in the context where they stand, making the technological prowess deployed completely imperceptible. Creating monumental installations very early on in his career, Charles de Meaux developed his Studio to enable the design, production and installation of his works.